The electroacupuncture according Dr. Voll is abbreviated by the capital letters EAV. EAV goes back to research carried out by Dr. Voll and others. Dr. Voll found that the electrical resistance over acupuncture nodes follows a significantly different trajectory compared to normal skin surfaces. This difference is known as the plateau effect. In contrast to the rest of the skin, measurements over a certain area vary only slightly by changes in pressure of the sensor on such node. This makes it easy to distinguish between a measurement node and plain skin surface. 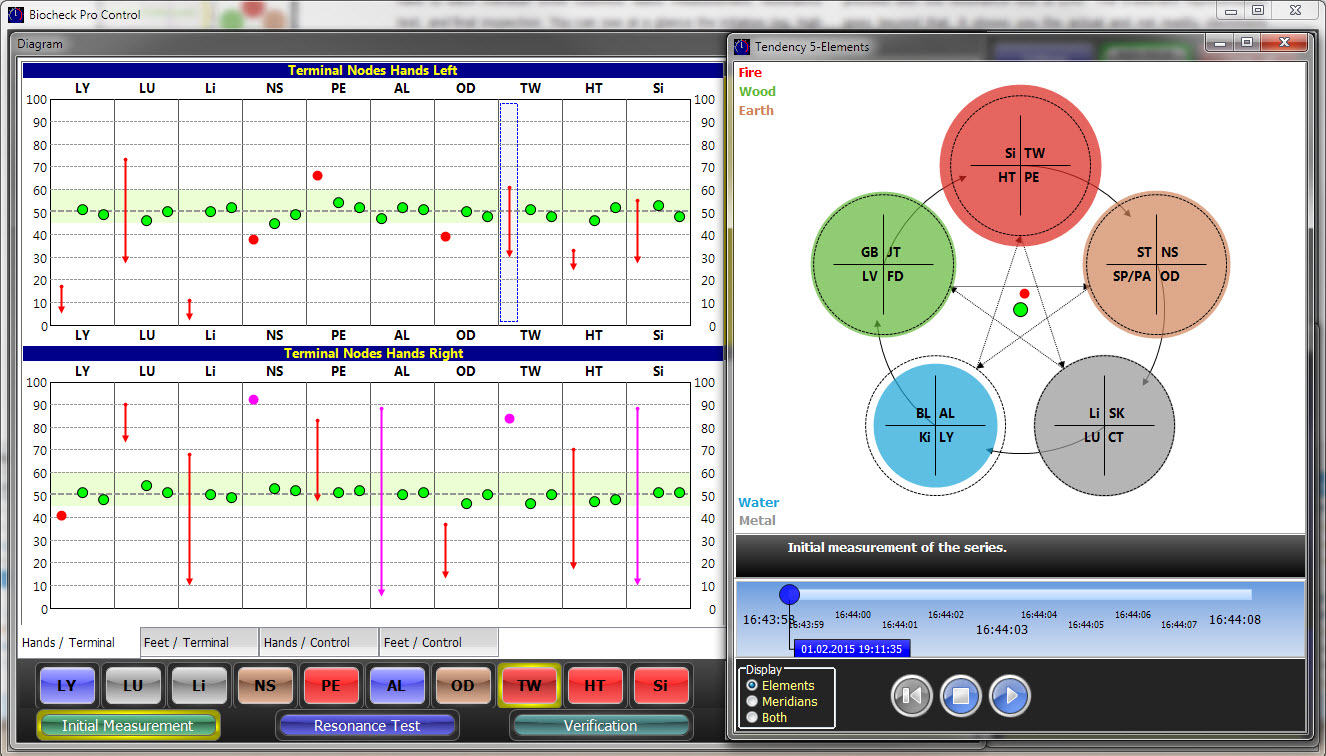 EAV readings are recorded on a scale from 0–100 with the so-called normal score being set at 50. This scale is based on a transformation of the actual reading. This transformation forms the basis for all EAV analyses,  and EAV devices have to be calibrated precisely according to this function. The calibration is easy to verify.

EAV assigns the reading at an acupuncture node to categories such as “overactive,” “subdued,” or “exhausted.” You can find out more about this in the literature. Energetic imbalances accordingly lead to high or low readings or to a drop in readings known as an indicator drop.

The amazing phenomenon was the discovery that the electrical resistance at acupuncture nodes (e.g., the terminal nodes of the meridians on the hands and the feet) changes rapidly when the client comes into direct or indirect contact with some “matching” external substances. Even without any direct contact between the client and a “suitable” test sample (i.e., a sample inside a sealed glass phial), the EAV acupuncture node reading will change almost immediately if an interaction occurs. All that is necessary is to place the test sample in a test tray linked to the client over a cable. The reasons for this phenomenon have yet to be explained. 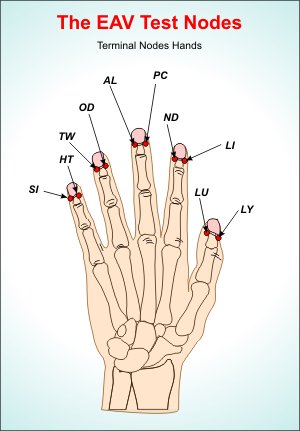 According to Dr. Voll’s work, this leads any user of EAV to the following conclusion: If a test sample normalizes an imbalanced acupuncture node to a reading of 50, then this indicates not only the presence of an energetic imbalance but also that this test sample can rectify it. This procedure is called the resonance test of the electroacupuncture acc. Dr, Voll.

The easiest way to perform acupuncture measurement is at the so-called “terminal nodes” on the hands and the feet. They are easy to localize and simple to measure.

Many of the classifications of meridians to individual organs or groups of organs come from Traditional Chinese Medicine (TCM). Others are based on empirical tests by Dr Voll and his followers. According to TCM, this classification of meridians to organs has yet to be confirmed scientifically and in medicine. Hence, it can only be interpreted hypothetically in an energetic sense. Amazingly, however, the substances frequently correspond to the structures related to the meridians.

How Do I Carry Out a Resonance Test?

You can perform a EAV resonance test with a test tray linked directly to the client through the reference electrode attached to the EAV device. Initially, you measure all the nodes in question in order to determine the status quo. Next, you choose the meridian whose reading deviates most strongly from the normal value of 50, and place test samples that are assumed to be normalizing in the test tray. Then, you measure the particular node again and note any change on the scale. By using appropriate test kits, you can effectively limit the group of substances that will have a normalizing effect on the readings at the acupuncture nodes. As a result, a resonance test takes only a few minutes.

The bioresonance and the electroacupuncture according Dr. Voll (EAV) are scientifically controversial and the teaching medicine is not appreciating the methods in some countries yet. All information on this internet presentation is related to energetic treatment. Any form of energetic treatment does IN NO CASE replace traditional MEDICAL TREATMENT.